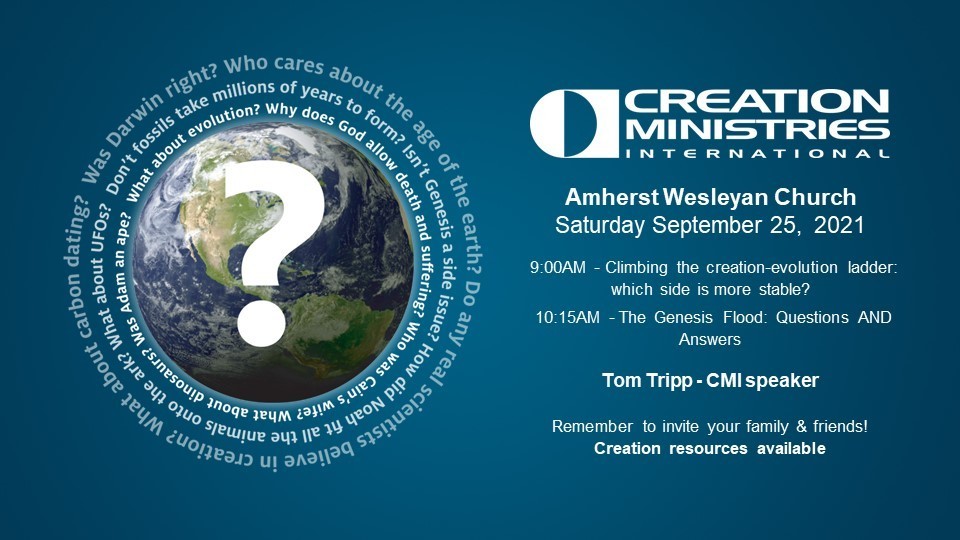 Our guest speaker Tom Tripp will be speaking on:

- Climbing the creation-evolution ladder: which side is more stable?
and
- The Genesis Flood: Questions AND Answers

Attendance is free and all are welcome. Donations are encouraged.

Creation resources will be available.

Thanks to a God-fearing family and many faithful Sunday School teachers, Tom became a follower of Jesus at a young age. As such, Tom would rarely miss “church”, yet at school he would either play ball hockey during recess or stay in the classroom to read science books. This led to the compartmentalization of science and creation resulting in his acceptance of the gap theory – an old earth interpretation of Genesis 1-2. However, when presented with The Creation Answers Book, all of that changed and he saw how science supports the Bible without the need to add millions of years. Over the years he has sought to “become all things to all people, that by all means” some would be saved (1 Corinthians 9:20-23).

Whether it was working for a large mining company (INCO, now Vale) for 35 years as a lab analyst, a computer programmer, or an HR trainer, Tom made it a priority to convey Biblical truth to others by coming alongside them and building relationships. “To facilitate” means “to make easier”, and therefore teaching became Tom’s outlet for sharing these truths– in both church and secular life. He maintains that if he can understand it in his head and believe it in his heart he can get the message across.

His post-secondary education includes a BSc (Hons) in Mathematics (1975) and a MA in Biblical Creation Apologetics (2015). In 2019 the Lord led Tom and his wife Bev to relocate from BC to the Maritimes, thus increasing their accessibility to their Ontario-based children (3) and grandchildren (5). Tom is grateful that “a wide door for effective work has opened” (1 Corinthians 16:9) for him as a CMI-speaker going forth to share with “gentleness and respect” (1 Peter 3:15) how “the doctrines of Creator and Creation cannot ultimately be divorced from the Gospel of Jesus Christ.”

From Videos to Podcasts

Subscribe to receive email updates with the latest news.